The Lemonade Stand’s story is interesting and inspirational story in its own right. The Bahamian, family owned and operated juice bar, café and catering company began with an initial investment of $430. That, according to its owner and operator Jared Whyms, was the sum of a live birth cheque from the birth of he, and his wife’s first child. Now the Lemonade Stand is becoming a recognized Bahamian drink brand and has developed its own unique following of ‘LEMONITES’, offering ‘exotic’ lemonade flavors along with ‘savory’ chicken, conch and mutton roti. 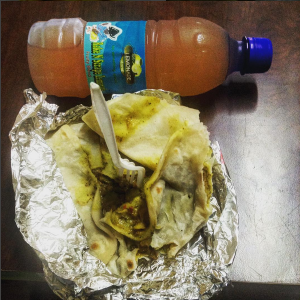 “I was in the insurance industry and my wife was in banking. We started our business in 2012. It began as an idea then magically our apartment kitchen was transformed into a beverage lab. After many sleepless nights of mixing, slicing, squeezing and blending was the birth of such flavors as Watermelon Berry, Strawberry Kiwi, Blunana, Pineapple Peach and Ginger. We knew from that moment just one taste would leave your taste buds wanting more and more,” says Mr Whyms who initially began making lemonade for just family and friends before deciding to make it a business.
“We created a Facebook page and started our lemonade delivery service to offices and construction sites and then it happened. The event that put us out there, The International Culture Festival. That year, 2012, we won best booth in the Bahamas section for their booth competition and that December we opened our first location which was on Carmichael and Blue Hill Road where we introduced our 15 foot lemon. Months later we opened our second location was on Mackey Street on the Q-Club property.”
Whyms says that in the Spring of 2014, the decision was made to bottle three of lemonade flavors to gauge customer response. Needless to say it exceeded expectations.

“We hope to let young people know that whatever the circumstance, with a strong determination, nothing is impossible,” says Whyms.