Whether you’re interested in swimming with pigs, getting up close with iguanas and sting rays while touring the Exumas or perhaps simply cruising around Nassau Harbour and Paradise Island, Harbour Safaris is just what you’re looking for.

Joanne Robertson, Harbour Safari’s operations manager told JustBiz: “The idea has always been around harbour tours that last around 75 minutes, just enough time to go out but doesn’t take up your entire day.” These tours combine history and culture with adrenaline and adventure. “We have excellent tour guides/first mates that are very knowledgable and can tell you about the harbor and The Bahamas in general; interesting facts abut pirates and bootlegging, the lighthouse and the first, British Colonial Hilton. 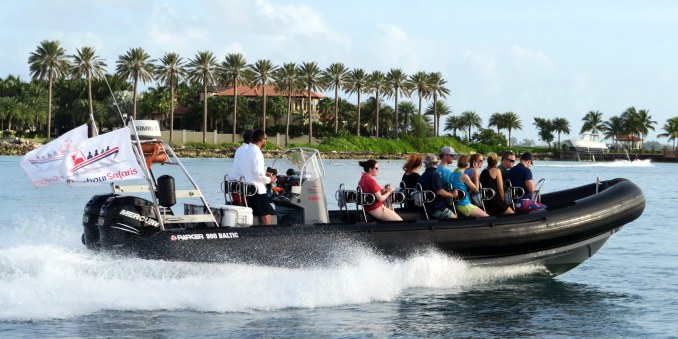 Robertson added: “We have also kind of expanded into offering Exuma excursions just because there was some demand there for it and it has really worked out well for us. We tend to leave the Exuma excursions for the weekend and do our tours during the week.” The company offers a six-hour tour of the northern Exuma chain with stops at  Allen’s Cay to feed the iguanas, swimming with nurse sharks and chasing stingrays. The company also offers a “full day adventure” in The Exumas with a stop at Big Major Cay to see the world famous swimming pigs.

“We are also going be trying out much shorter tours called Bay blasts which are going to be 30 minute high speed boat tours , more abut the adrenaline excitement. We are going to be starting those probably by the end of this month.”

The company operates a (RIB) rigid-hulled inflatable 900 Parker Baltic boat, with saddle style seating which can accommodate 12 persons. “We are very small right now. There is probably about five of us right now working to make this dream come through. The owner and I are both from Nassau. The boat captain is originally from Andros but has been working here for 15 plus year sand he’s incredible. He’s very knowledgeable and great on the water.”

For more info check out:

Reblogged this on Justbiz242.com and commented:

An awesome way to experience the Exumas.